In the past week or so Kanye West activated his Twitter and subsequently set the internet on fire. Talking everything from new music to Trump support, Ye was thrusting himself into the media spotlight, and this of course has its consequences. After proclaiming his support and admiration for Trump, Kanye seemed to lose 9 million followers in a matter of minutes. While this appeared to confirm the country’s distaste for Trump, it was ultimately a glitch on Twitters end that resulted in Kanye’s apparent loss in clout. With his Twitter following currently sitting at 28.2 million, the Ye stans are here to stay. 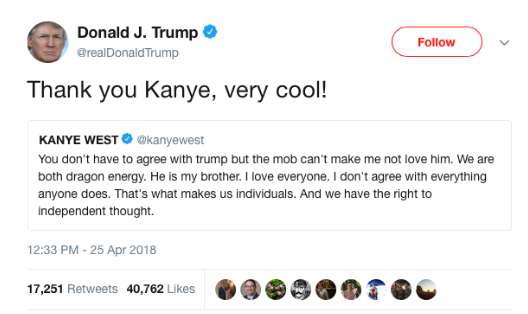 With this mass following, Kanye has seen his influencer value on Twitter skyrocket as well. Just 4 days after the reactivation of his account, West’s value per tweet jumped from $0 to nearly $29,000. This surge of value stemmed from news of his many upcoming projects, but this value ultimately did not last. As soon as the first wave of tweets regarding his praise for Trump hit, Ye’s value per tweet dropped to just above $14,000 and falling. 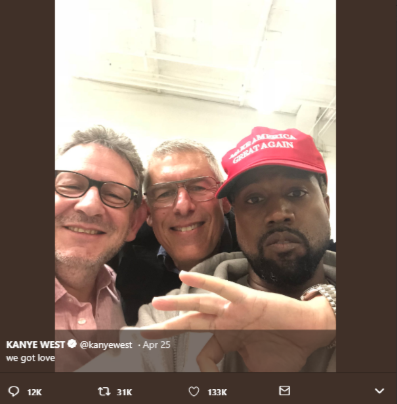 In the mess of all the controversy created by West and his Twitter outbursts, a unique interaction between him and John Legend caught the public's eye. Kanye tweeted a screenshot of messages Legend sent to the artist, urging him to reconsider his support for Trump. This was particularly interesting as it is well noted that Legend and West are good friends along with their wives, Kim Kardashian and Chrissy Teigen. While many saw this interaction as a sign of downfall for the friendship, days later Kanye tweeted a picture of the two celebrating at Teigen's baby shower, ultimately “agreeing to disagree” on their political views. 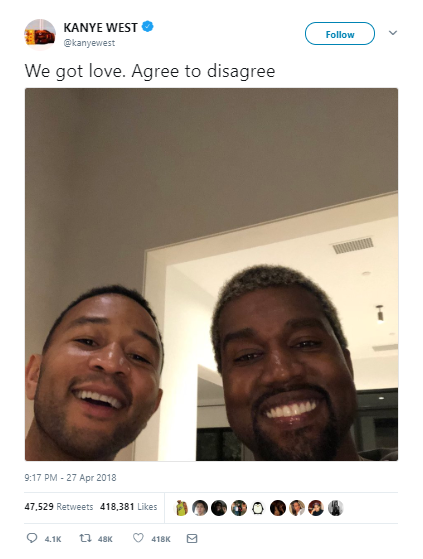 With numerous albums and projects coming from Kanye in the coming week’s, it will be interesting to see how his following and value fluctuate as he continues to market himself on social media.