How Rihanna Dominated New York Fashion Week and Why No One Should Be Surprised
Sep 18, 2017

Here’s the lowdown: Rihanna had quite the intense New York Fashion Week. On September 9th she dropped her brand new makeup line Fenty Beauty across Sephora stores and online and followed up a day later with the equally impressive Fenty x Puma SS18 show at Park Avenue Armory.

As reported by Newsweek, Rihanna made a pretty $10 million for launching her beauty line under Kendo Brands, a division of LMVH in charge of other makeup heavy hitters like Marc Jacobs Beauty and Kat Von D. And the internet hasn’t stopped talking about it all. Clean branding. Magnetic packaging that keeps all your products together. 40 all-inclusive foundation shades for all complexions and genders. You name it.

With the celebrity makeup movement not going anywhere anytime soon, we decided to test how Fenty Beauty fared compared to other favorites such as Marc Jacobs Beauty, KKW Beauty and of course, the crown jewel of limited availability, Kylie Cosmetics by Kylie Jenner.

Since the “Diamonds” singer first teased the beauty line on August 1st, it took her only a month and a half to build a combined following of 1,217 million across Facebook, Twitter, and Instagram. While her own following is evenly spread out with only 26% of the staggering 215 million total followers coming from Instagram, Fenty Beauty, on the other hand, owes 82% of its to Instagram, with an average of 80,000 engagements per post. 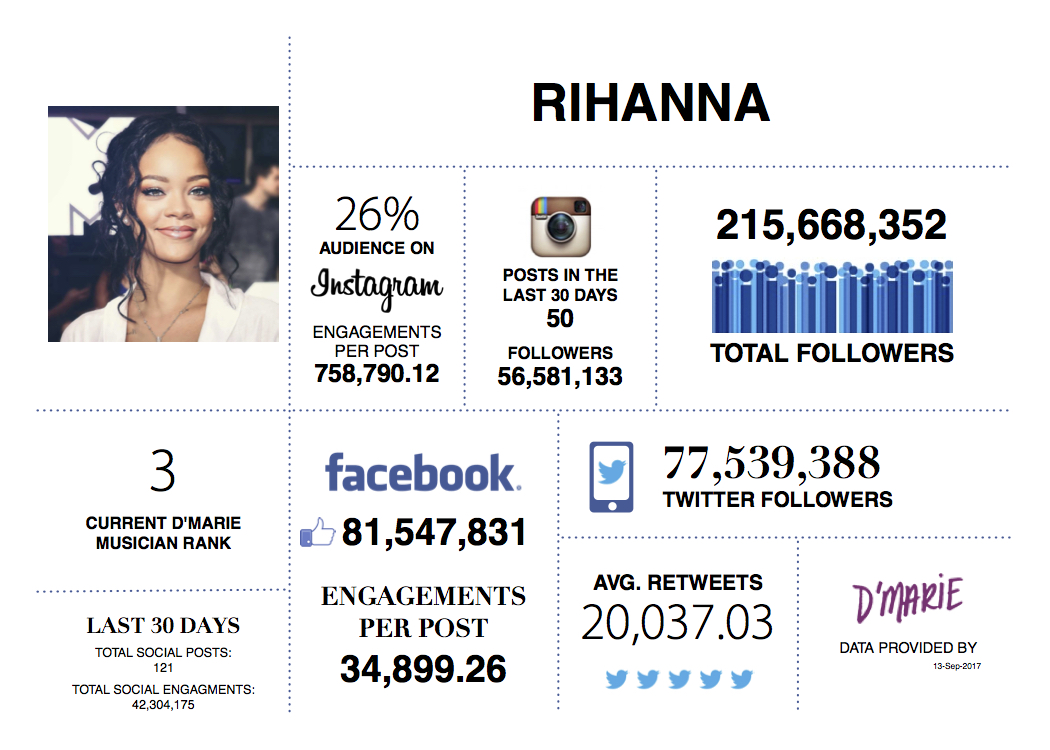 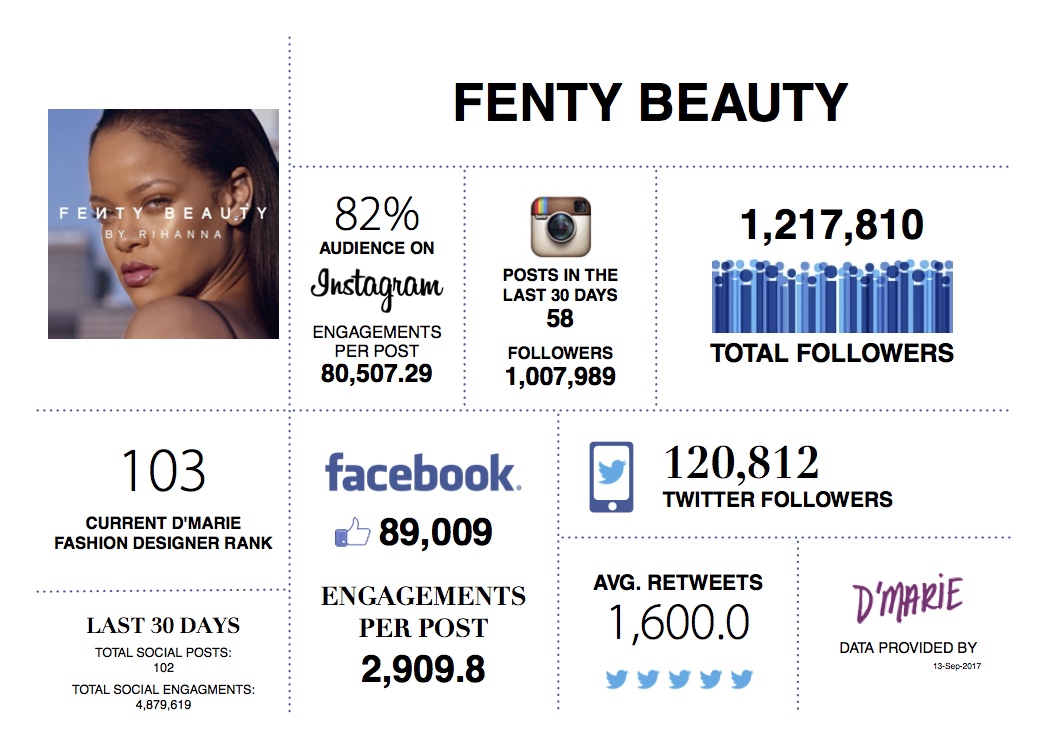 The hype around Fenty Beauty as an “inclusivity game changer” did wonders for its social media, clocking in an average growth of 67,000 followers per day, with 54,000 of them on Instagram. The brand just hit 1 million followers on the platform this morning, thanks to 50,000 new overnight followers, likely celebrating the good news that the first products to sell out were the dark skin foundation shades, historically neglected by beauty brands time and time again.

In comparison, Kylie Cosmetics' own impressive accounts have a total following of 18 million, 14 of them coming from Instagram with a slow but steady growth rate of 2,000 per day over the last months. It’s worth noting that Kylie’s brand has 5 times more followers on Twitter than Rihanna’s, yet RiRi still has more engagement with an average 1,600 retweets compared to Kylie’s 246. If it’s more praise about Rihanna’s diverse skin tone offerings, we’re all for it.

The name of Kim Kardashian also came up often over the last month, often whispered around the hype of Rihanna’s, with some citing the white and nude color scheme and packaging of Fenty Beauty oddly similar to that of KKW Beauty. But what do the numbers say? KKW Beauty touts an impressive total following of almost 1,1 million, with 910,000 coming from Instagram but with a much slower growth rate of only 700 followers a day. 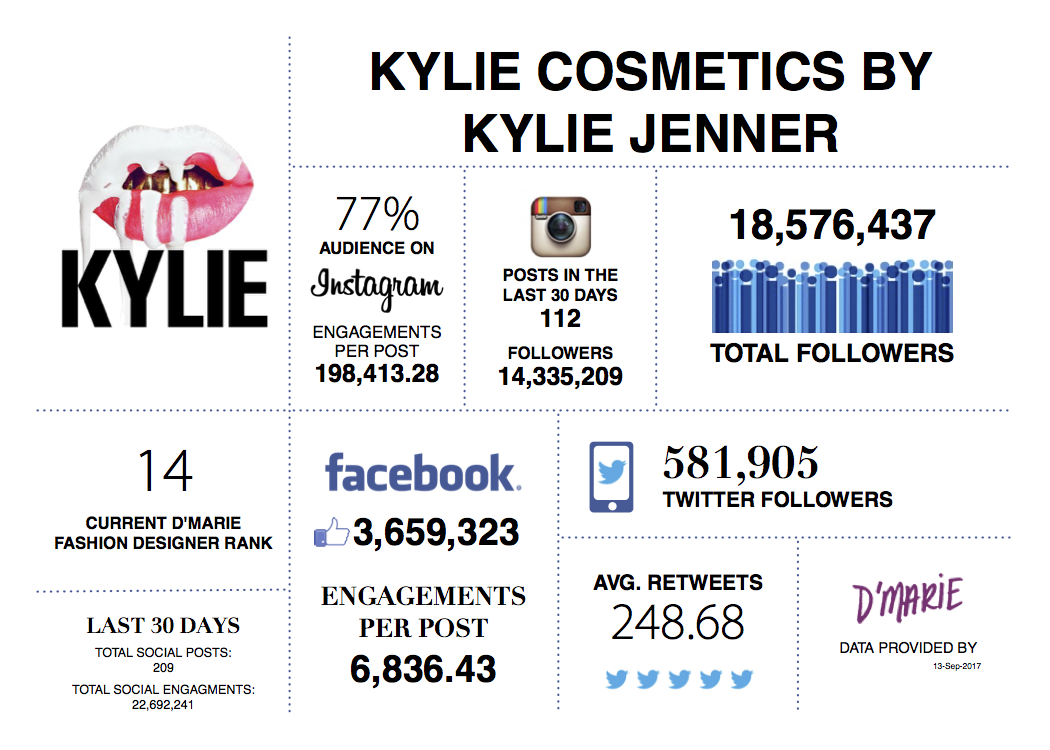 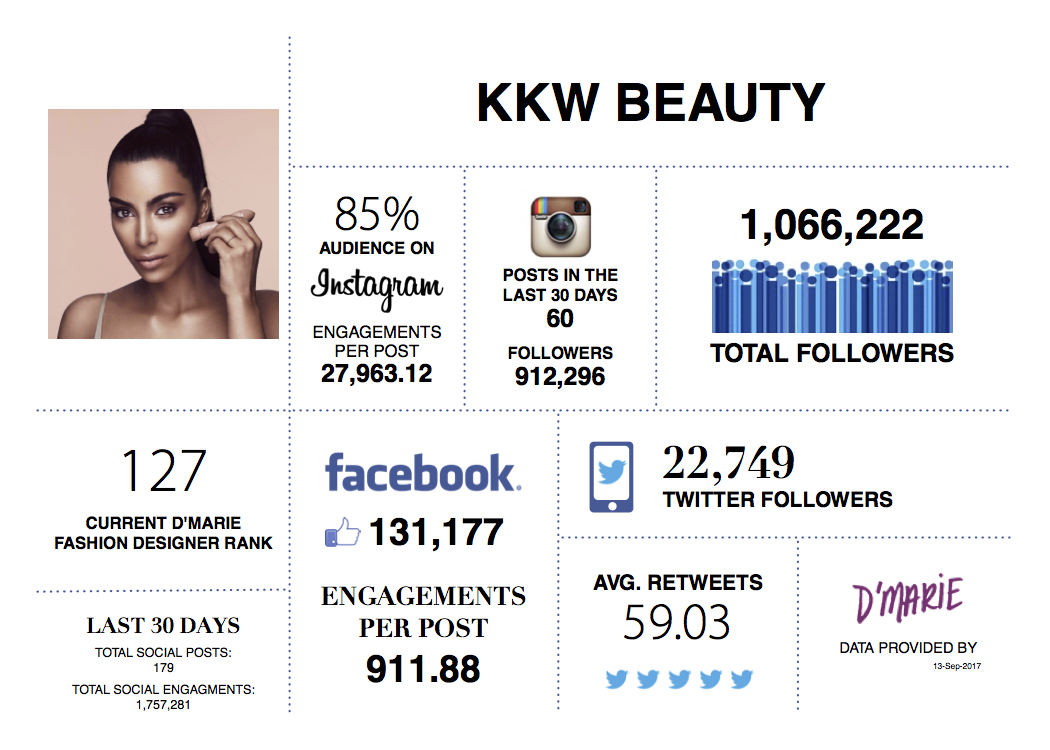 Another brand managed by Kendo, Marc Jacobs Beauty can boast about its 1,8 million total followers, interestingly with a much lower engagement rate than Rihanna’s latest project. Over the last 30 days, Marc Jacobs Beauty has posted 233 times to incite 648,000 engagements in comparison to Fenty Beauty’s modest 102 posts provoking 4,8 million engagements. While the hype around Rihanna’s launch is well deserved, it is important to note that smaller accounts generally have a higher percentage of engagements than larger ones. 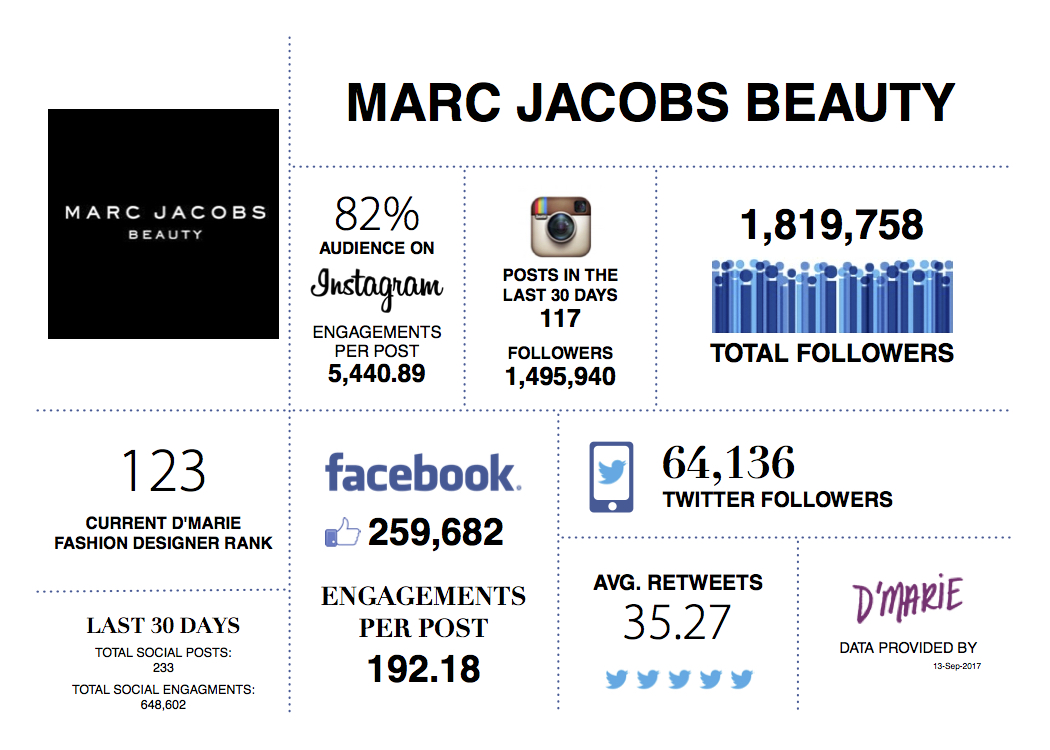 Recapping the equally impressive Fenty x Puma SS18 show, complete with pink glitter mountains, X-Games athletes somersaulting over the audience, and the “Phresh Out The Runway” singer making her entrance across the back of a motorbike, it definitely made its own social media splash.

Puma’s social media growth has been steady with 9,000 new followers per day, with 6,000 coming from Instagram, where they savvily mix photos from Fenty x Puma with other new collaborations on the horizon. The sum of their values per post quickly spiked the day after the show, jumping from $12 185 to $12 434.

And what about the star herself? Rihanna’s average growth on Instagram, 21,000 per day, nearly quadrupled on September 9th, the day of Fenty Beauty’s launch, part of a super impressive total growth spike of 145,000 followers across Insta, Facebook and Twitter. Rihanna has reportedly been planning the line for 2 years, and between Fenty x Puma and Fenty Beauty, we can all agree that hard work pays off.