Big Brother 19 Finale and Recap: Who Played the Best Game, and Who Had the Best Social Media Game
Sep 22, 2017

And just like that, Big Brother 19 came to an end last night after a long and intense summer. What a season.

The finale started with Christmas Abbott, Paul Abrahamian (last year’s runner-up) and Josh Martinez in the house, with Christmas exiting first, making her the final member of the jury.

Many fans were rooting for Christmas, who went through a lot this season, leaving the house for an emergency foot surgery before quickly returning to the competition, crutches in tow. When it came down to Josh choosing his opponent in the final two, surprisingly (or not) he went with Paul, thinking he had a better shot against him. Totally right call.

The jury’s vote came down to four and four, with Cody casting the final vote, crowning Josh the winner and making Paul the first person in the history of Big Brother to make it to the final two twice without winning. Congratulations to Josh!

Every season of Big Brother quickly launches its cast into the public sphere, with enviable social media followings, endorsements and new projects to boot. Right on the cusp of the finale, we sat down and analyzed the social media power of all our favorites from this summer.

There’s no surprise that fitness superstar Christmas leads the pack with a total following of 1,359,433 across Instagram, Twitter and Facebook, not so closely followed by Paul’s 473,384 and Jessica’s 330,233. Translation – Christmas’s total following makes up a staggering 48% of all the followers of all the cast members, and on Facebook her 739,921 are an even more impressive 89% of the total share. How’s that for a strong game? 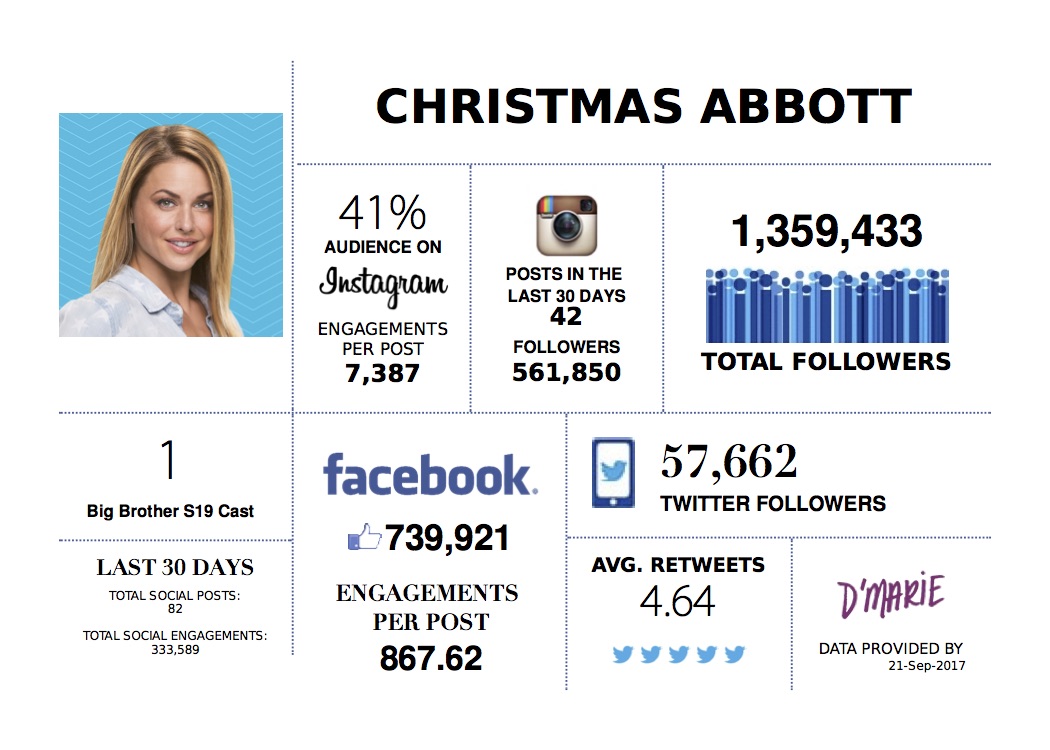 While Christmas’ followers can be attributed to her motivational posts and national bestseller The Badass Body Diet, Paul’s following is all Big Brother 18. And what about Jessica?

Her self-proclaimed “Brutally Honest. Wildly Inappropriate. Only Mildly Apologetic” approach has earned her this season’s highest total social engagements of 651,578 over the last month. She has the second largest Twitter following of 91,966, closely behind Paul with a growth rate of 3,226 per day. Jessica’s been wasting no time with her newfound popularity, already dabbling in the world of sponsored posts for candles, workout gear and subscription boxes. 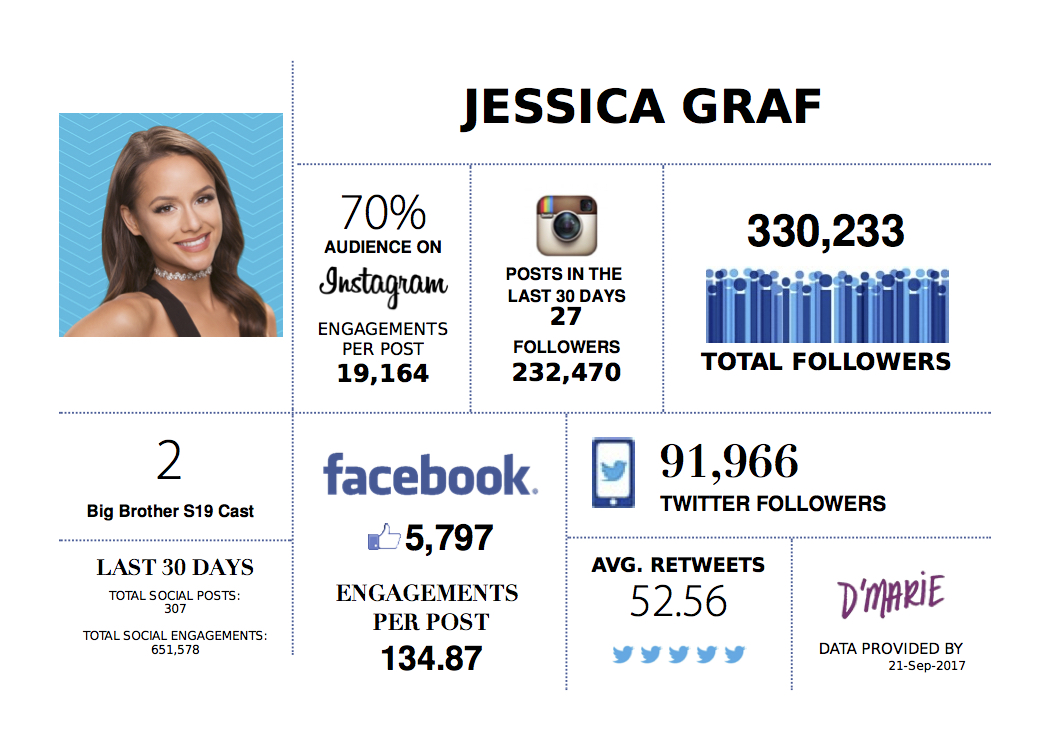 It’s worth noting that while many cast members handed off their personal Twitter accounts to family members, Christmas and Paul were the only two who had a consistent content calendar over the whole summer. Between advertising their other projects and reminding fans to vote, both accounts were managed to perfection.

In an interesting turn of events, Paul’s Instagram account had comments disabled up until August 6, perhaps as a way of encouraging more engagement on his posts. In last night’s finale he admitted to playing the game a little too well – resulting in a classic loss at the hands of a bitter jury. His social media business of selling friendship bracelets seems to be doing fine, however, with the new 11,171 followers he’s accumulated since last night. 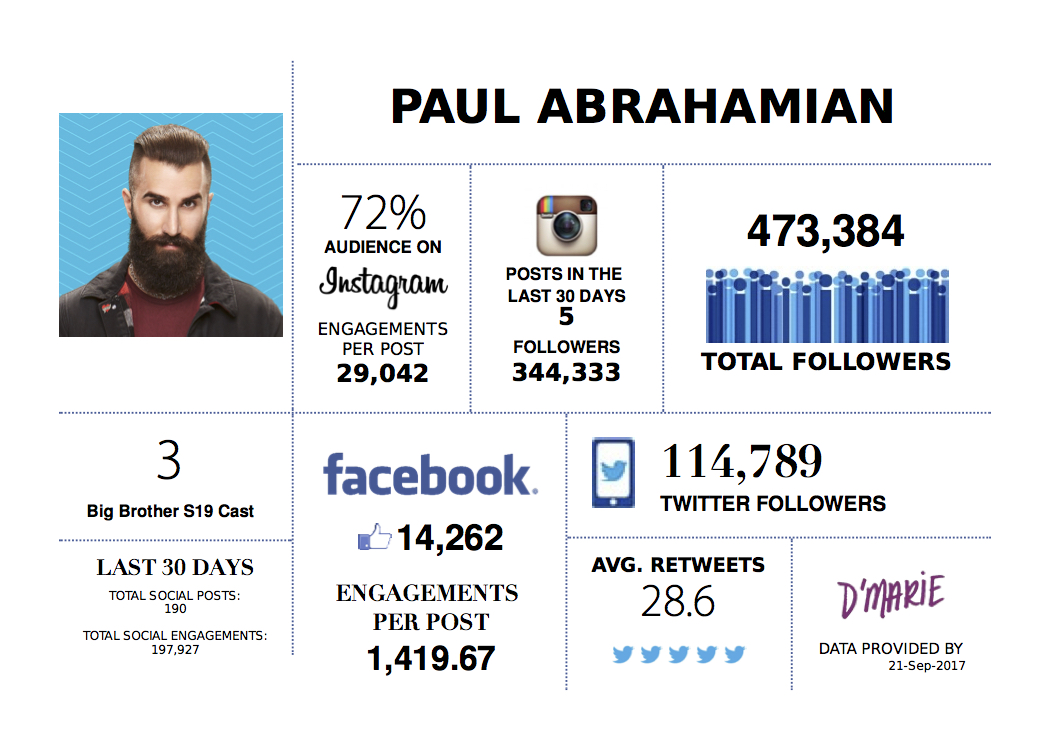 And what about our winner in one of the most “volatile” seasons, as host Julie Chen described it? Josh’s combined following is a more modest 42,764 but with a remarkable 10% growth rate since last night (whole 4,381 new followers). 3,485 of those came from Twitter, so we’ll all be eagerly waiting to see what the “First Latino, first Cuban and first POC to win Big Brother” (this morning’s tweet) is up to next. 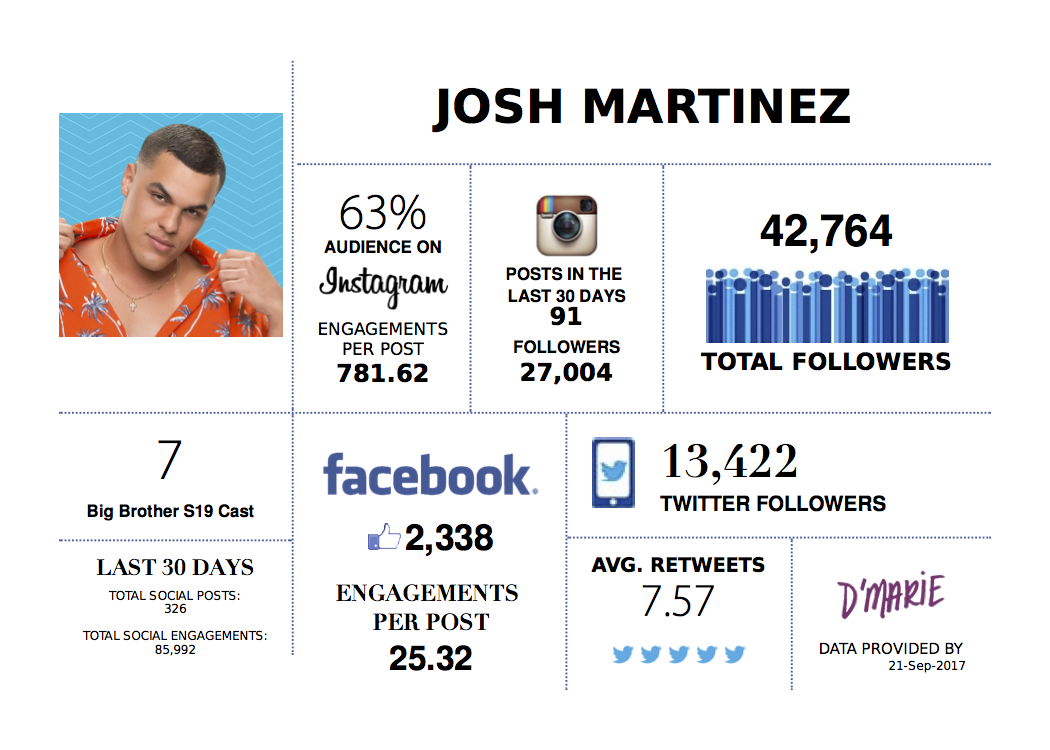 Check out the complete social following ranking below: